“The Americans are coming”. Two hundred and fifty years after Paul Revere’s midnight ride, Richard Masters (the chief executive of the Premier League) should be driving the length of England informing Premier League clubs of a reverse invasion. Whether American investors are as unpopular as the Redcoats amongst the average fan varies from club to club. However, it is clear that with an increasingly competitive league and augmented costs in a post-Covid era, this investment is sorely needed by clubs.

The latest American foray into English football is Chelsea’s takeover by a consortium led by Todd Boehly and Clearlake Capital which completed in May 2022. In a deal worth £4.25bn, Boehly’s consortium purchased the West London based club from Russian oligarch Roman Abramovich. Abramovich's connections to Russian President Vladimir Putin meant he was sanctioned upon Russia's invasion of Ukraine and consequently Chelsea were left unable to sign players or offer new contracts. After 19 years of ownership, Abramovich put Chelsea on the market and indicated that he wanted new owners to be 'good stewards' of the club.

From 250 initial enquiries, the club received 12 credible bids which were then whittled down to 3 final bidders. Ultimately Boehly's consortium were the preferred bidder, beating competition from consortiums led by Boston Celtics co-owner Stephen Pagliacci, by the Ricketts family, owners of the Chicago Cubs and by a consortium led by Sir Martin Broughton (whose investors included Serena Williams and Lewis Hamilton). According to a Chelsea statement, Boehly's consortium was chosen, inter alia, because of: "the strength of the partnership between the group’s component parts, which includes Mark Walter, co-founder and CEO of Guggenheim Capital [and] Todd and Mark’s participation in the ownership of several sports franchises with sustained winning traditions, including the Los Angeles Dodgers, the Los Angeles Lakers, and the Los Angeles Sparks". 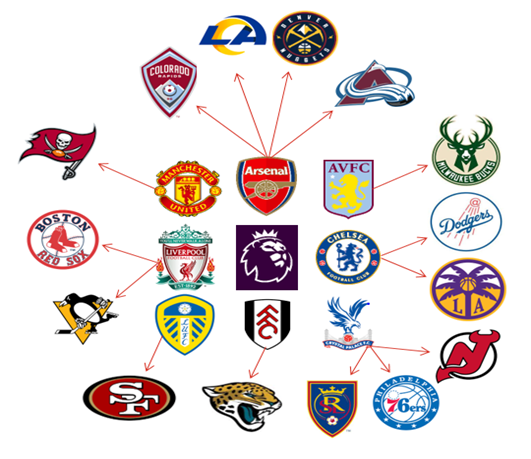 As can been seen from Figure 1, eight of the twenty English Premier League teams have American investment. What has led to this influx of American investment? Most likely, the fact the Premier league has historically been considered as an undervalued sporting market. The average NFL franchise was valued at US$4.14bn by Sportico in 2022 compared to just US$1.29 billion for the average Premier League club. The global nature of football (it is estimated there are five billion football fans worldwide by FIFA) means football clubs brands can be monetized through increasingly lucrative television deals. According to Forbes, the Premier League has the third highest annual average domestic TV and streaming deal (valued at US$2.08bn annually), behind only the NFL (US$10.40bn) and NBA (US$2.67bn).

The pyramid structure in European domestic football also makes it an attractive investment opportunity. Many traditionally large English football clubs with extensive fan bases are currently in the lower leagues of English football (e.g. Coventry City, Sheffield Wednesday and Sunderland). With the right investment and management, there is a route back to the Premier League (and its riches) for these teams. The blueprints for this already exist; take Leeds and Nottingham Forest's respective recent returns to the Premier League and the turnaround at European powerhouse A.C. Milan under American investment firm, Elliott Management.

However, the planned 'European Super League' may have scared some prospective investors off. Proposed in 2021, this would have seen the top twenty teams from across Europe play in a single league, thus threatening the integrity of the English football pyramid and the attractiveness of investment in lower league teams. Notably, three of the five leadership positions at the European Super League were occupied by super-rich American owners of English Premier League clubs – John W. Henry, Joel Glazer and Stan Kroenke. However, so fierce and robust was the backlash, the European Super League quickly collapsed; it is unlikely to be resurrected in the near future.

This should reassure any nervous prospective US investors and will be welcome news for the significant number who have already invested. Figure 2 shows the number of clubs in the top four divisions of English football that have American investment. However, there is significant scope for further American investment in the three lower tiers of English football given only 17% of those clubs have 'US dollars' invested in them (compared to 40% of Premier League clubs). 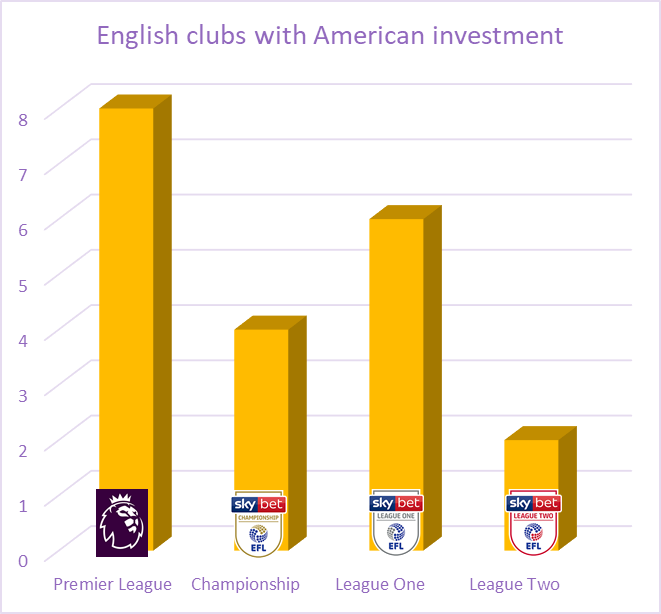 These lower league clubs present opportunities for a different kind of US investor. Whilst the Premier League clubs may only be attainable by the world's super-rich, the English league clubs are likely affordable to those who are merely very wealthy (net worth in the high tens and hundreds of millions of dollars).

The archetype of this new type of US investment is non-league Wrexham A.F.C which was bought by Ryan Reynolds and Rob McElhenney in 2020 for $2.5m. Whilst Wrexham failed to gain promotion to League 2 last season, the Hollywood duo are already looking to capitalise on their investment in Wrexham having filmed a FX docuseries entitled "Welcome to Wrexham", proposing domestic and international streaming deals and ensuring Wrexham's inclusion as the only non-league club in the popular FIFA video game (the football version of Madden). Surely it is only a matter of time before similar US investors follow.

For investors in Reynolds / McElhenney's category to be successful, they will need to be conscious that fans view their clubs as pillars of the community (and not businesses). However, for those who can demonstrate this empathy combined with business acumen (sorely lacking in English football in recent years), significant financial rewards await. They might even have fun and win some trophies along the way.

Whilst the Premier League clubs may only be attainable by the world's super-rich, the English league clubs are likely affordable to those who are merely very wealthy

Chelsea’s Todd Boehly: 'Ultimately, I hope the Premier League takes a little bit of a lesson from American sports. Why don’t we do a tournament with the bottom four teams? Why isn’t there an All-Star game?' https://t.co/xOtWBnjzog

Business interruption insurance overview: why you might still have a claim

Lifting Lockdown – the bumpy road ahead after the budget

Delaying the inevitable? Businesses struggling to stay afloat thrown a further lifeline by the Government

Super League: What legal consequences will the clubs involved face?